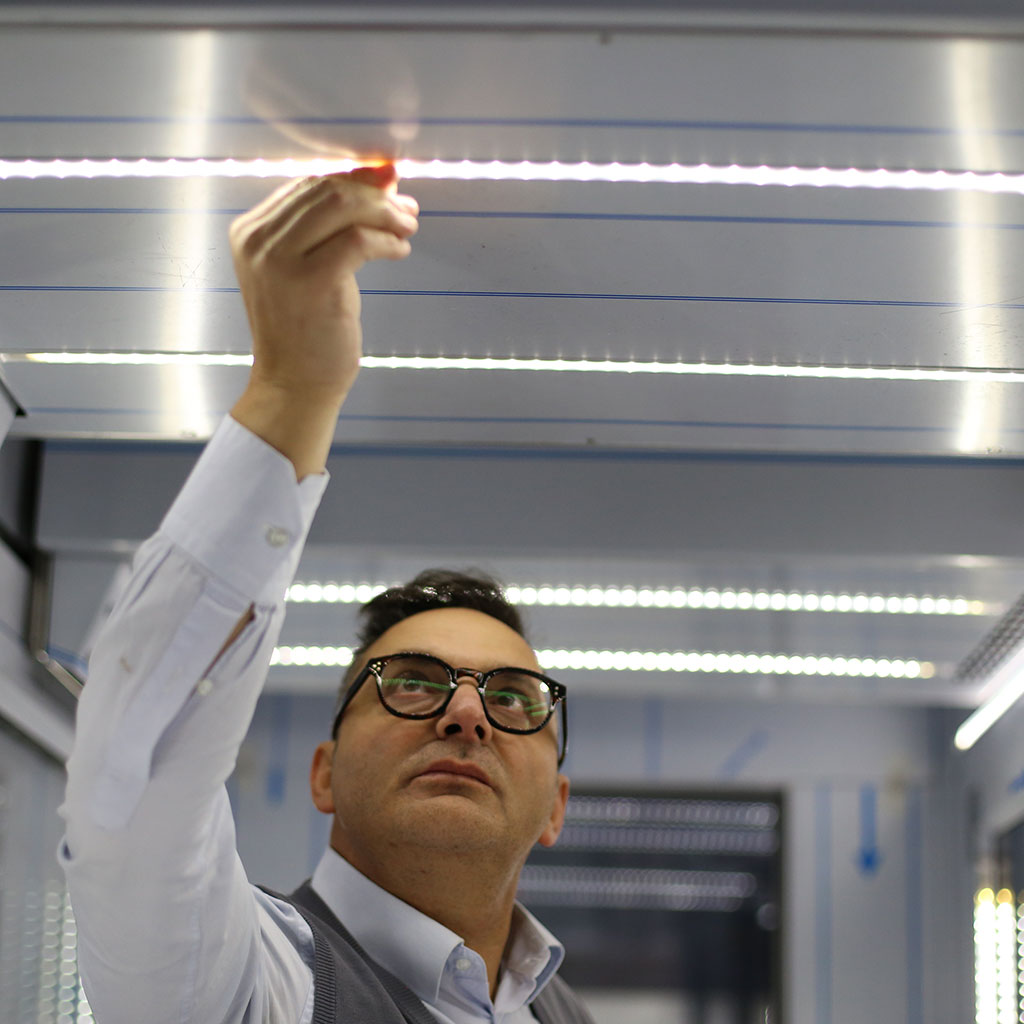 In his role as Expert of Agro-Alimentary Quality and Safety International Systems, BRC - ISF - K.H.C. - ISO 9001-22000, Alessandro Cuomo acts as a consultant for some of the biggest actors on the International Agro-alimentary scene and intervenes as a teacher for training Institutes, professionals and public authorities who wish to get specialized on his method.

The Department of Veterinary Medicine and Animal Production of the University of Naples (Italy) and Alessandro Cuomo collaborate in the RATIONAL project (improvement of functional characteristics and shelf life of food deriving from innovative techniques of buffalo breeding).
This collaboration has been developed as part of a national project funded by the EU and the Italian government and deals with the development of innovative technologies regarding the transformation / maturation of male and female buffalo meat. In this context, the Cuomo method is experimentally applied and scientifically validated by a university research team, in order to verify its compatibility with the highest national and international standards of food quality and safety. 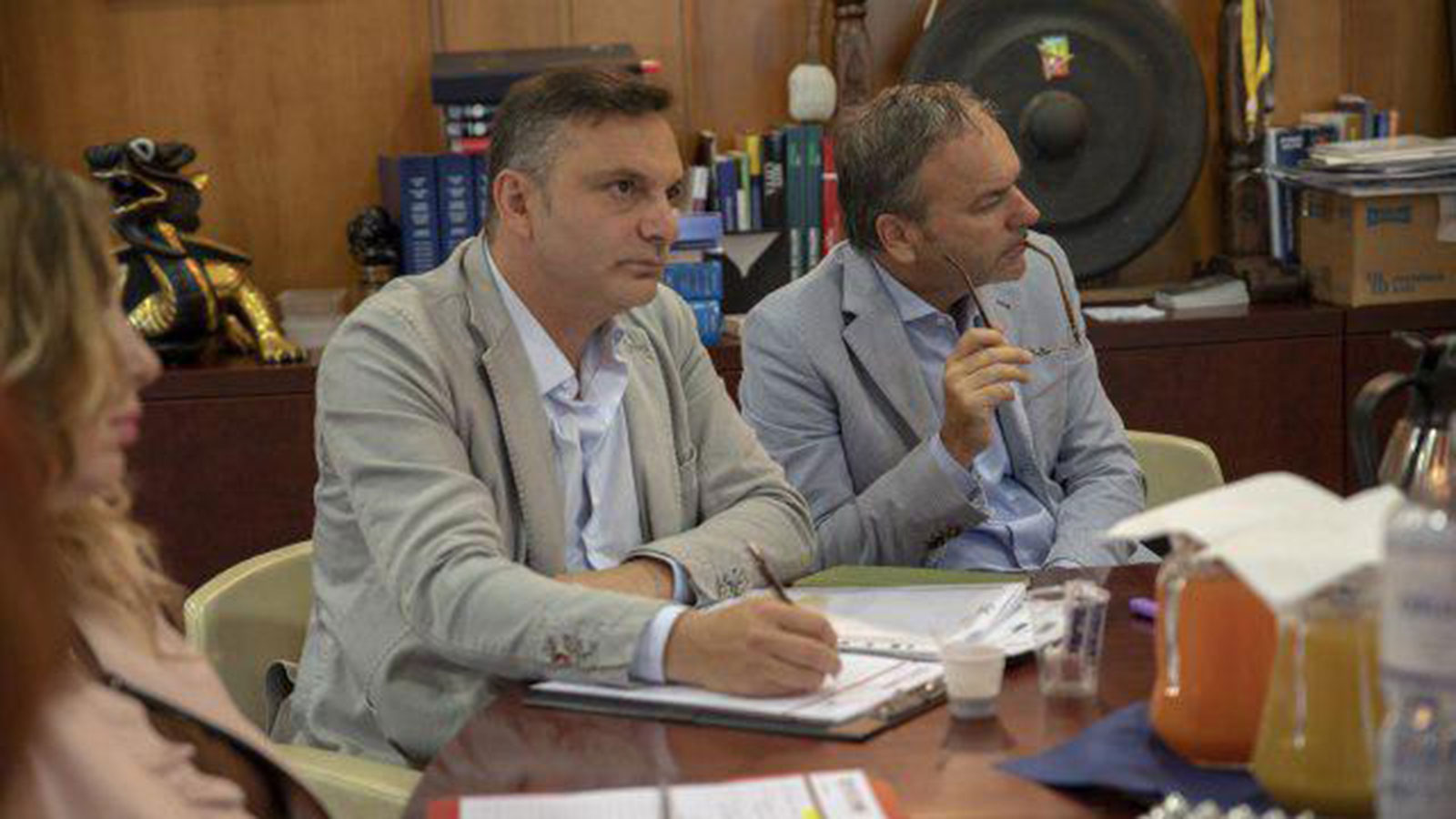 The Institute for Agriculture, Food Research and Technology (IRTA), belonging to the Government of Catalonia (Spain) has launched a research program related to the Cuomo Method on the maturation of meat.
As part of this collaboration, Cuomo’s method is designed to promote the transmission of scientific discoveries in the agri-food sector and used for experimental purposes.

The bond of esteem and collaboration between Alessandro Cuomo and Federcarni has been going on for many years. The federation makes use of the advice of Dr. Cuomo as an expert on the processing of meat-based foods and together they cooperate to preserve the small meat shops. In 2015, Cuomo took part as a speaker at the Federcarni Convention in Catania, ” Proper and balanced nutrition”, as Certified Expert for International Food Security. 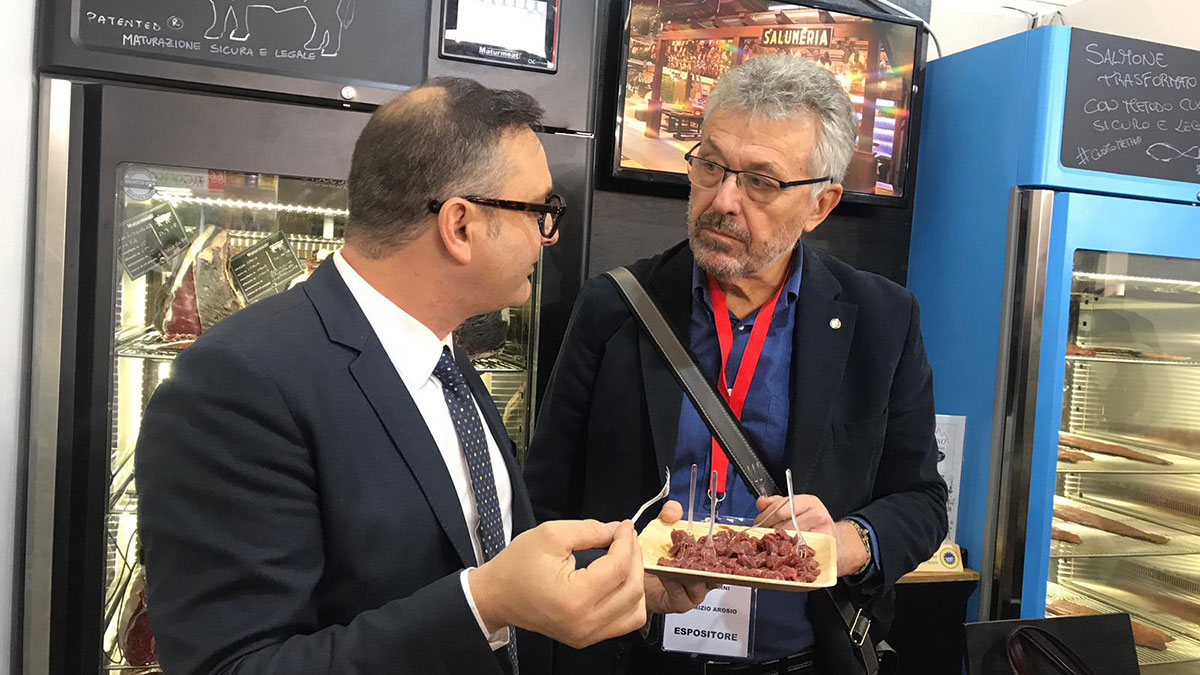 Auchan Italia avails itself of Dr. Alessandro Cuomo’s advice as an expert in food safety and for the ad hoc creation and validation of its processes of production of processed meat with a patented device and method. 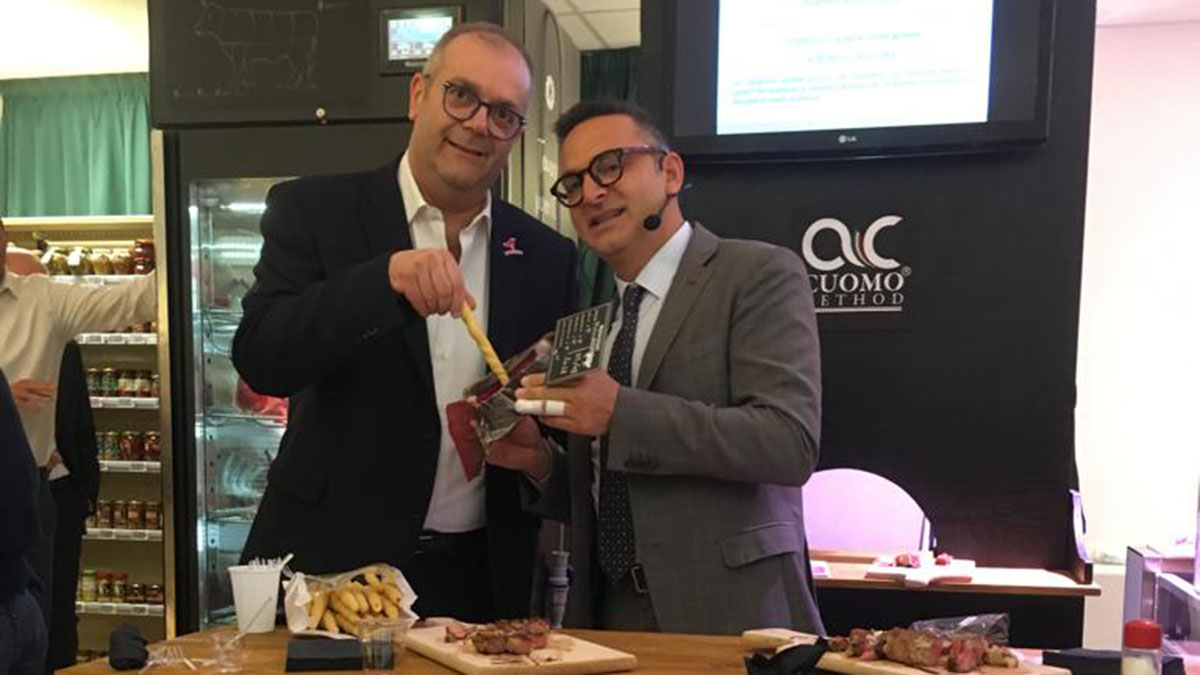 The operators of the meat sector of Spain, have decided to specialize in accordance with the European directives with the Cuomo Method.Butchers, restaurateurs, producers and breeders together in the halls of the Gremi Carnissers of Barcelona (the federation of butchers of Catalonia) to be introduced to a new way to mature meat: in a safe, genuine, legal and more than ever profitable way.

Consultations and courses of high training on maturation and the meats matured with the method he patented and applied to the patented Maturmeat® machinery. An advice that has lasted for years and that increasingly contributes to the spread of knowledge of the organoleptic properties typical of the meat matured with this patented method. 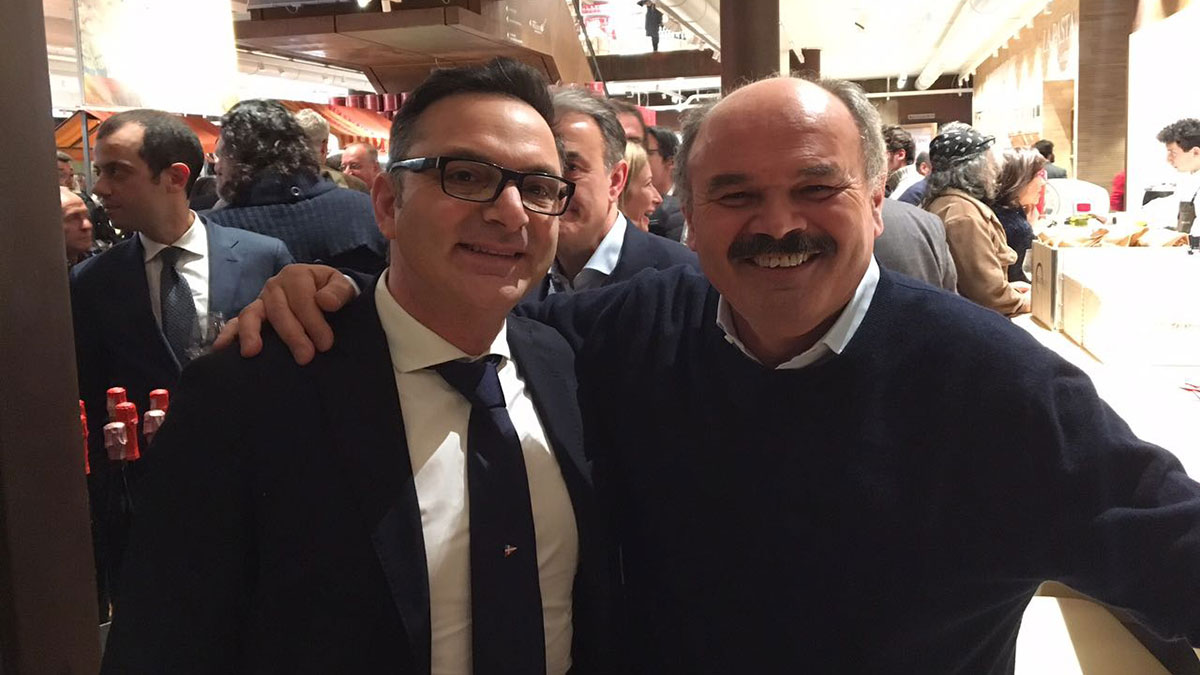 Dr. Alessandro Cuomo, Director of the Academy, as well as Auditor in International Systems of Management and Food Safety ISO 22000 is a lecturer of the International Master Class, the high-level training course organized by the Accademia Italia Stagionello® which forms ” Traditional Italian food Supply Chain Manager “. The Master’s course, in English, welcomes participants from all over the world at each edition. 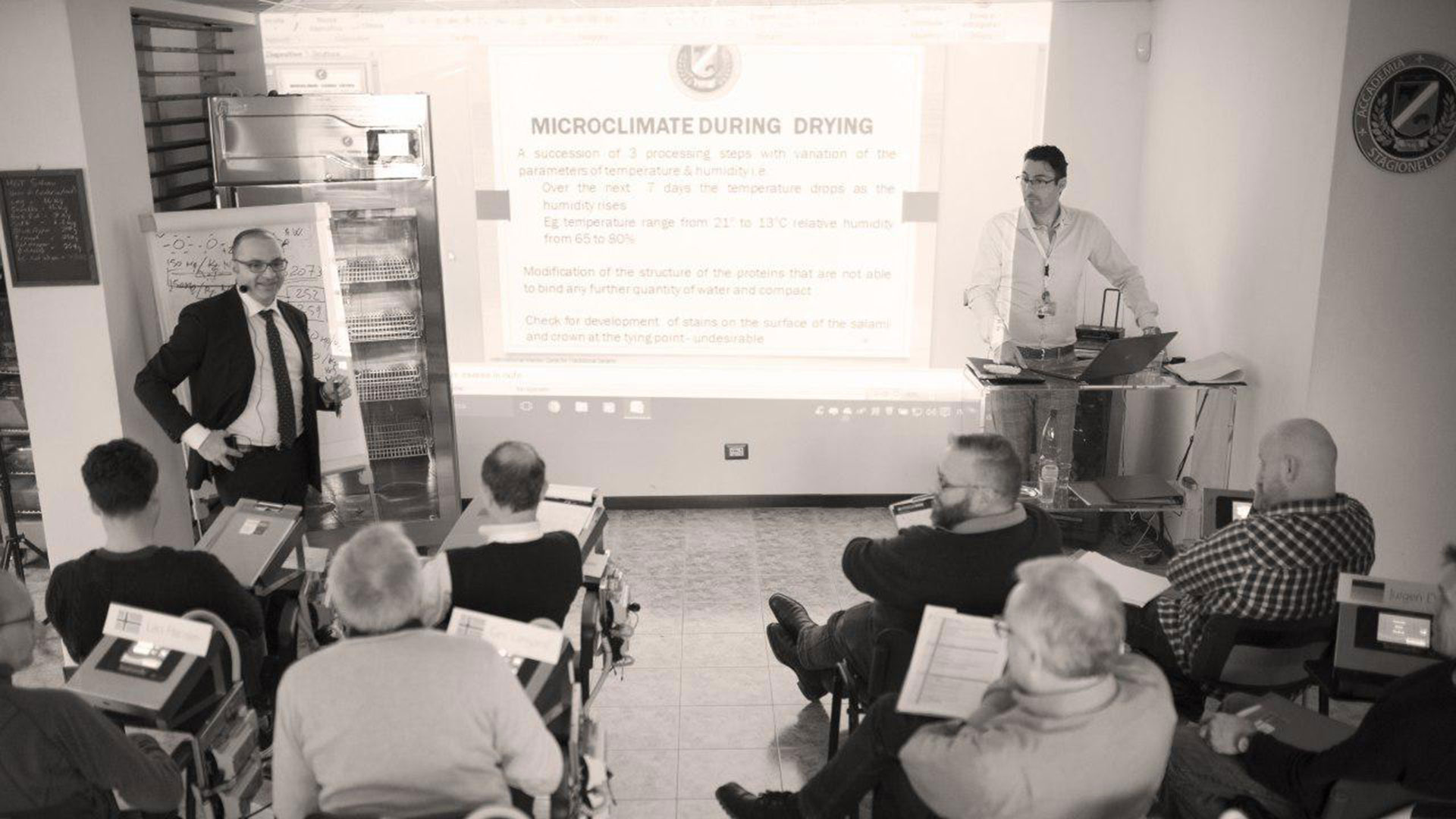 The Dairy Farm in The Desert

Saif Mohammed Al Midfa, Sheikh of the United Arab Emirates, asks Alessandro Cuomo to produce mozzarella in the desert instead of importing it.
An apparently impossible challenge which the competence and resourcefulness of Cuomo have turned into a plant that produces 600 kilos of mozzarella a day, made with fresh milk from Friesian cows bred in U.A.E
Consultancy, planning and realization … a complete plan that from an almost utopian ambition has been transformed into a concrete company with high quality standards.
In every part of the world, even the most improbable, the teachings and patents of Dr. Cuomo have arrived.
In the Philippines and in Africa to bring the Italian tradition
In the Philippines and in Africa he has held courses on the production of cured meats through traditional methods and systems. The choice of the raw material based on the peculiarities of the place, the recognition of the various types of cutting suitable for the various processes. Still the selection of machinery and ingredients such as salt and spices, up to the casings.
The term course is almost inappropriate. These are formative experiences rich in scientific and practical notions that have made Dr. Cuomo an ambassador of traditional food manufacture made in Italy.
Even today, after many years, these productions take place in these countries and in the world according to the traditional method patented by Dr. Cuomo.

Maturation with the Cuomo Method and the Maturmeat® device: a question of class and parameters to be evaluated.

Meat quality improvement indexes through the “maturation” process with  systems and innovative pH-controlled maturation methods, the “Cuomo Method”. Each piece butchered, regardless of the cut, is presented to the customer as a unique work of art. The comparison that lends itself easily to an overview in a meat shop is the juxtaposition of a single […]

Protagonist at the international trade fair Host 2019 in Milan was the inventiveness of Made in Italy, together with the race to obtain the licenses for production and marketing of Italian machinery and technologies: this has also happened for Alessandro Cuomo’s invention of the device and method for food maturation at a safe and naturally […] 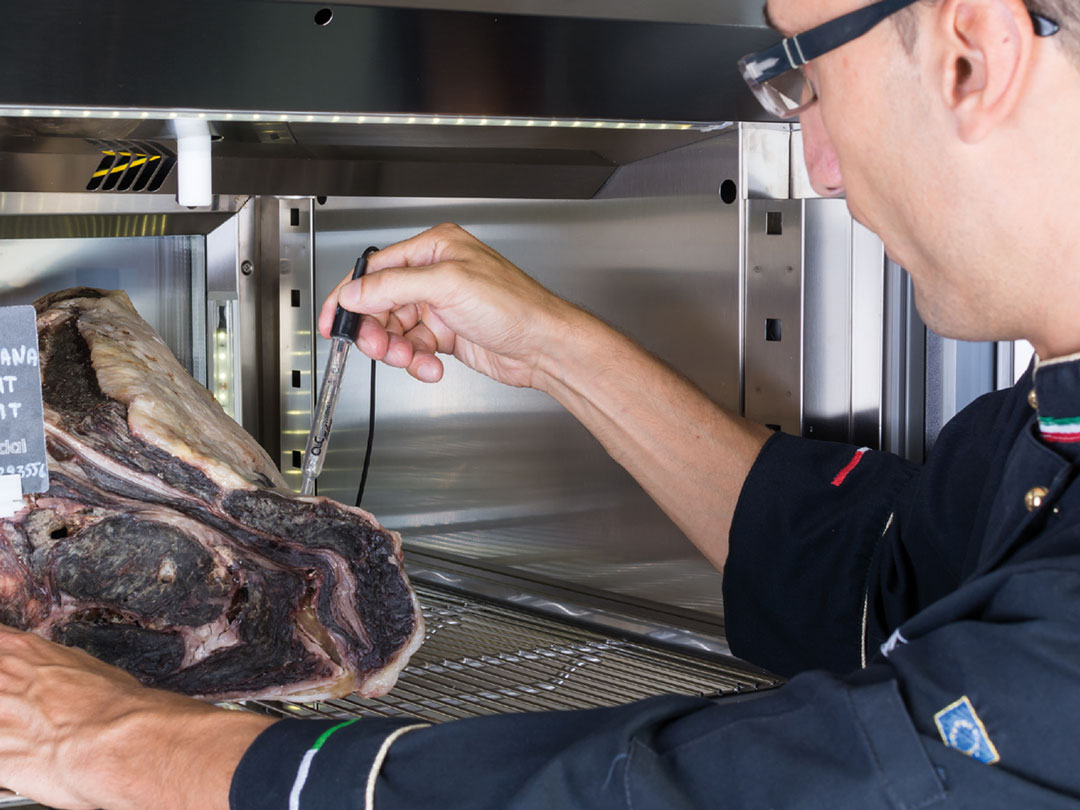